Michael Wainwright started in clay at the youthful age of 7. Fast-forward to college, Michael graduated from NYU in 1991 with a degree in clay sculpture. Post-graduation, Michael spent the weekdays throwing pottery and the weekends selling his handmade wares at craft shows and street fairs. What catapulted him to ceramic success? Two hours in line outside of an NYC store, Henry Bendel.

Hear the full story from Michael himself and watch him throw a clay pot live on camera. Transcript below and more stories like this on our magazine page. 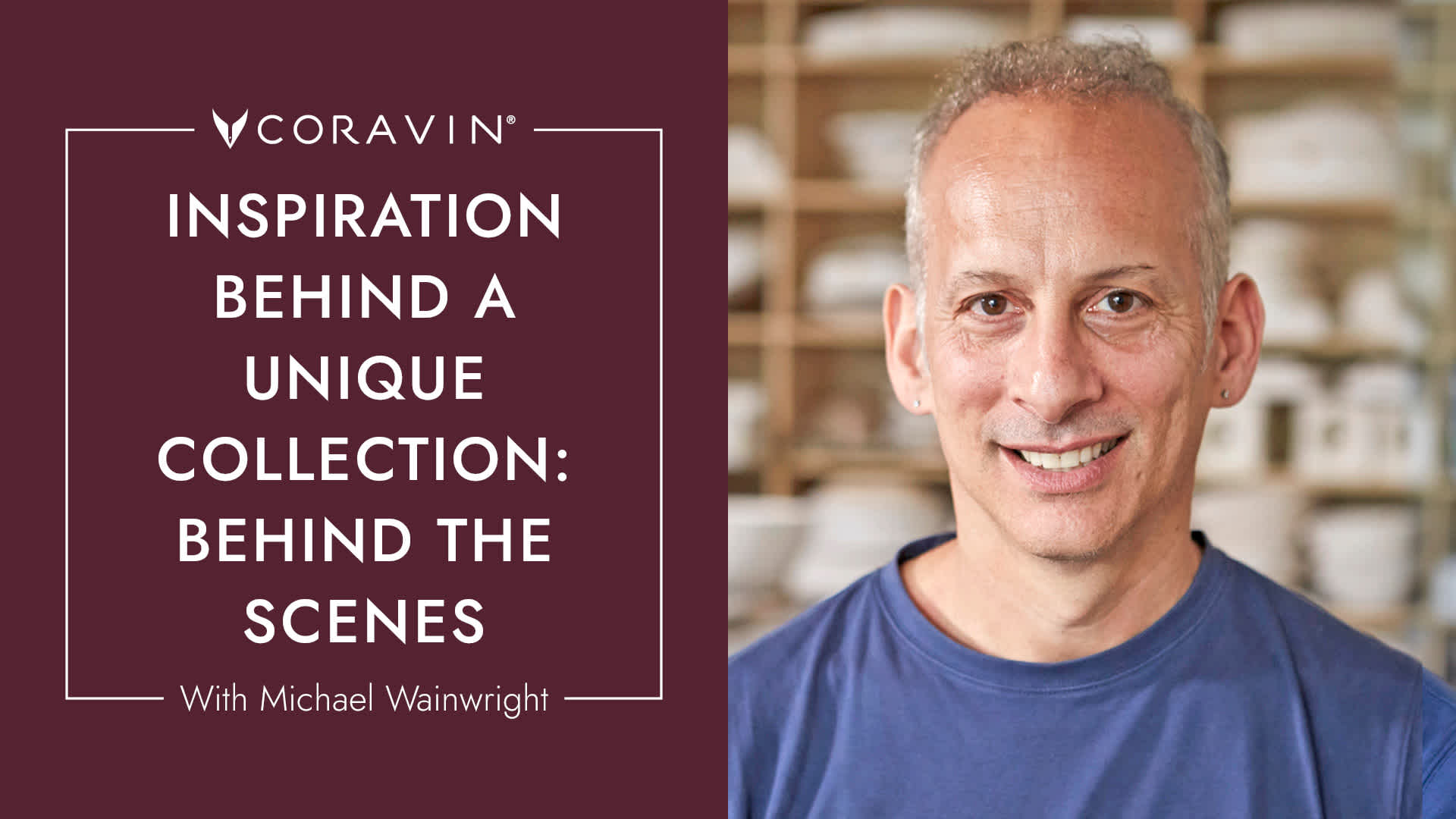 Inspiration Behind a Unique Collection: Behind the Scenes

Michael Wainwright: I'm doing well. Thank you for visiting me here in the Berkshires at my studio and my little showroom here.

LB: You know, I was really excited. I love your products. The aesthetic is like very up my alley. What is your favorite thing about designing and making these pieces? They're all so interesting.

MW: First of all, I've been working in clay since I was seven years old. I really got into it when I was a junior and senior in high school. I have a BFA emphasis in clay sculpture and master's degree. I ran the studio at the one of the schools that I went to, and the reason I bring that up is: I come from the studio pottery world and when you graduate with a degree in clay sculpture, what do you do? I started by throwing stuff during the week in New York City and then I sold it in street fairs and flea markets around the city on the weekends. The point of that is, I’m passionate about the studio pottery world [and it’s important that] everything I make has that handmade feel that vibe. So that's the main thing that I like to do and how lucky am – I get to make things for a living now?! I get my hands dirty in clay almost every single day .

LB: Sounds like a dream. I actually did some pottery in high school. I managed to create a position as a teacher's assistant so that I could do it again and keep throwing pots. It's one of the most soothing things throwing a pot, right?

MW: Indeed, my mom still has the little ducky and the horse I made when I was really little.

LB: So, I live on Cape Cod, so when I saw your Truro collection, inspired by walking barefoot on the beaches and golden dunes of Truro, Cape Cod, I was very excited. What was your inspiration behind that?

MW: As you know, since you're from Cape Cod, Truro is a beach town. At the end of Cape Cod, you have Provincetown – Truro is the next town over and then, of course, Wellfleet.

When my kids were little, we would drop the kids off with grandparents and my wife and I would vacation down in Truro. Do you care if I show some pieces.

LB: Please, show them off.

MW: Alright. First of all, welcome to my studio. This is the show room and this is my working studio, my wheel, and a little kiln. I'll try not to get people too sick from moving the camera too quickly.

So, this is the Truro collection. You can see that the inspiration comes from walking in the sand. All of these are little footprints.

LB: It could be interpreted as the dunes too.

LB: One of the designs that caught my eye was the Borealis. How do you create that? To those that aren't familiar with it, it looks like flowers are embedded in gold. It's very unique.

MW: I like to tell people that I have a paintbrush and a very steady hand and I hand-paint each one of these crystalline but, actually, that's not true. Really, Borealis is a glaze. With a regular glaze, you glaze your piece, put it in the kiln, bring the temperature to around 2,300°F, then you set your kiln off and the next day you have your finished pieces. With a Borealis, since it's a crystalline glaze, the crystals grow in the cooling process of the kiln. So, again, you glaze your piece, you put it in the kiln, you get to temperature 2,300°F and instead of shutting it off, you slowly cool it. I hold it at three different temperatures. At the hotter temperature, the crystals grow and they become more starlike. In the cooler temperatures, the crystals grow in a round pattern. With typical crystalline glazes, you have a few crystals on a piece and that's about it. My Borealis pieces have a tremendous amount of crystals going into them.

LB: So, I have to ask, is there a story behind the face platters and bowls?

MS: The face collection is something I did immediately out of graduate school. These are some of the first pieces that I sold in street fairs and flea markets around the city. A dear friend whom I was working for said, “Henry Bendel has this deal, you should really try to go meet with them.” Henry Bendel is a Fifth Avenue store and they used to have this gig where, on the first Friday of every month, a buyer would meet with anybody. So, I stood in line for two hours met with the buyer. He looked at these pieces, then he looked at me and said, "This is why we do this.” It was the first real store that I sold to. They did really well with the collection – they sold out of it two weeks before Christmas. They expanded me when they expanded into many stores and then, unfortunately, they had some financial issues and my department ended up disappearing. I did nothing with these pieces for a very, very long time until the pandemic hit. I wanted to try something different on my own platform, something that no one else had. I introduced these pieces again and, again, they started selling like hotcakes. So, I'm now opening them up to other platforms such as yours.

LB: Did you want a demo?

MW:  I'm going to show you the process of how I actually throw these and how I put the faces on.

*Watch our video to see the entire process and conversation.

LB: Is that modeled after anyone in particular?

MW: No, actually, I have a box full of faces – all different faces. Okay. The one that I use for this collection is just this one, but I have a box over there that I took from different architecture or wherever I can find them. I spent some time in Italy so a lot of them came from there. I even took a mold of my own face when I was in my 20s and shrunk it down. So, I used to do these bowls with my own face and then I thought, “That's probably not a good thing to do.”

LB: What do you do for glaze and all that with these bowls?

MW: What you have to do is then it goes over here to these drying racks and they have to dry completely. When it's completely dry like this (shows pottery), this is some clay that has been dried but hasn't been fired yet. If I were to pour water back on this, it would turn back into mush, back into clay. Once the piece has been fired, the chemical water comes out of the clay – you can add water to it and it will never turn back to mush. When pottery is not fired up to temperature, it's still very porous which means you can pour glaze on and it will act like a sponge. So, the first firing is called your bisque firing – that's basically where you get the sponges. Then you glaze it, which is a liquid. This is a piece that has been glazed with that Borealis glaze, but has not been fired. You can see it's really chalky. Then, the metal which you can see on the edges of these is a real 24 karat gold and platinum. That's an additional firing. It goes up to around. It goes up to around 1400 degrees.

LB: Which of your products do you use the most in your daily life?

MW: I use a couple of things. We use my Truro dinnerware – the salad plates and dinner plates – all the time. Also, these dinner bowls ­– we use these just as much as we use dinner plates.

LB: That's the kind of bowl we use all the time, too.

MW: As you know, they're great for pastas, rice dishes – they're really, really functional. In the day, they used to be called rim soups. I never use these for soups ever, but we use these all the time for the things that I just mentioned. Oftentimes if we're throwing a party, I'll still use the white depending on what we're cooking but then I'll dress it up with some gold or some platinum when people are coming over.

Also, my new Panthera with no metal on it.

LB: Is it textured glass? What is going on there?

MW: It’s got an etched surface on it and, I have to say, the video call doesn’t do it justice. When there's red wine in this (points to glass), this crackle really pops this surface.

LB: Panthera, is that your signature name for it or is that a technical name?

MW: Well, Pnathera, they're like a panther or leopard.